Technology in the Classroom

“The role of the teacher is changing. We are not the keeper of information anymore. Kids find information everywhere.”
— Dr. Roland Rios 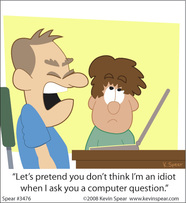 
Why Use Project Based Learning

Education today is extremely challenging, we compete with and against so many outside influences. Students also come to school with so much baggage. They are worried about a whole host of problems that most teachers could never dream about, or want to for that matter. Just to illustrate one problem that is a growing concern worldwide according to census data in the United States there are 13.7 million single parents in this country, and they raise a whopping 22 million children. Now there is nothing wrong with being a single parent, but it is a struggle for that family and 27% of single mothers do live in poverty. For minorities the statistics get even worse. For example 52% of Native American children live in a single parent home.
Now, why do things like single parent homes matter to a teacher? The answer is simple students come to school with concerns and struggles, nothing new. However, in an age of ever increasing social problems, and other things screaming for student's limited attention,  we as educators need to come up with better ways of getting our share of that attention, and engaging them in their learning process. The key that will be presented on this website is the use of technology and project based learning. According to google, "Technology can help classrooms be more like real-world environments and better prepare students to enter an increasingly connected and globally-competitive workforce. And there are many technologies that can help teachers streamline daily processes and increase opportunities to incorporate critical thinking, communication, collaboration, and creativity into students’ learning."
In their article Seymour Papert and Gaston Caperton strongly argue that it is time that we take our schools out of the 20th Century and bring them into the 21st Century. I especially agree with them that we stop arguing over how to use technology in the classroom and start working toward how it could be. Papert and Caperton also argue that education could improve if students were allowed to do projects that matter to them. Dr. Gary Stager also argued the same thing in his article What Makes a Good Project.  He pointed out," who does the project satisfy? Is the learner as enthusiastic a beneficiary of the project as the person giving her a grade? Great Projects benefit the learner more than the teacher." I think we all can remember those times we were excited about and assignment, and were so proud of the work we had accomplished when we were done. We also can remember those times we were given assignments that were long and tedious. Which did we like?
In conclusion I would like to take the stance that technology is a great tool to be used in the classroom. Until we develop ways to use that technology to help our student become engaged learners, and develop their own vision for their future, we are failing them.
"Lesson 1 - Explore Cultural Resourcess."
Course Builder Lesson 1. Google. Web. 9 July 2015.